Kate is a student living in Kyiv, whom I met walking on the street around Independence Square. We spoke about Euromaidan, her thoughts about the current state of Ukraine and the Yanukovich-headed government, and what she wishes to change. 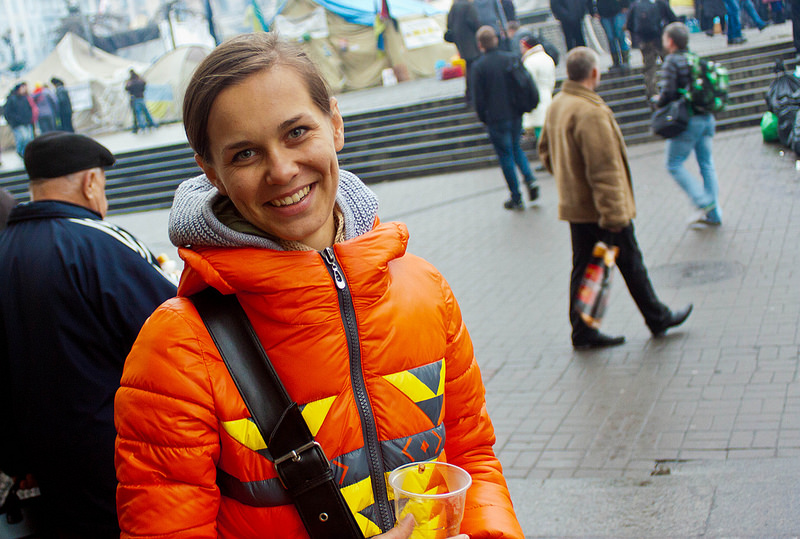 Me: You live in Kyiv?

Could you tell me what you’re doing in Independence Square right now?

Now I just want to somehow give support to Maidan, I’m staying here and listening to everything and giving information to my friends, and that’s all because I don’t have a lot of time – one or two hours per day. I have a lot of friends here – guys who fight – and if I can somehow help them with warm clothes or food or something I will.

So you help them if you have the time to give?

Now – one week ago I arrived from a big trip. I was here on Maidan one and a half months ago, so now I’m just a little bit confused. I cannot understand what’s happened, I see these pictures of dead people and I always come here and cry, and I cannot do anything now. But I plan to help more in the future.

What needs to change in Ukraine?

We need smart people in the government – not bad guys who were in prison. It’s just a stupid thing, unbelievable, when the president is a guy who was in prison twice. And when these guys in government try to – before this revolution they tried to get money for people every time, it was not a good life. But it has stabilized, and people were quiet, “OK, we have some money, we study, we have schools and universities and now – but when this president was election, he was a liar, twice. And people were afraid to say no. Because they know that these guys are bad men. And now – this is a chance to change. And after this situation, this event on Hrushevskoho street, I don’t think this revolution can be peaceful.

Do you hear about anything happening soon?

I know if, next Monday – if this 15-day amnesty rule…if all our guys from Maidan remain imprisoned, I think there will be some action from Maidan. Also, people are a little bit scared now – helmets and masks – everybody is afraid, after the fighting and being caught and taken to the woods…now it’s like a partisan war. When people – boys and men – make some little groups, some little things, burn some car, or burn some thing. I know this will happen soon. Maybe in one week, it will start. A small revolution everywhere, and I hope there will be some results.

Do you want to be a part of the European Union?

You know, now it’s not important.

It was important at one time but not any more?

I think now it’s not important. Maybe if we win and have to decide…I think Ukraine can be separated from both Europe and Russia. But I think government thinks another way, because they know this economic situation…I don’t know this, like where we can buy gas, and etc. Maybe if we have to decide, it may be better with European Union, sure.

So now it’s more important to be free of this government, and everything else is not as important?

Yes. You know first few weeks, it was Euromaidan, and now it is Ukrainian-maidan, because everything is not for the EU, because for the EU – for them it doesn’t matter what happens here, they don’t help us, actually, I cannot believe that they want to help us so much and get us into the union, and that’s why I think we can be ourselves, and we can win.

So this is a revolution and not a protest movement now?

What do you plan to do afterwards?

Just be happy. If we win I think everybody will be happy and study, work, make something for our country, I don’t know. Be the future of this country because we are such patriots.

If Maidan is to succeed, do you feel the unity displayed between people of different politics will continue?

Maybe. You know, Ukraine has two separate parts, East and West, and if Ukraine remains one country, this fighting will continue, because we fought for many years and many centuries, but maybe this revolution…it is a very big revolution. Before there were many small fights and revolutions – we fight many times. I think this will be a big change.

So you’re saying Ukraine has fought within itself many times in the past, and you think after this that may change?

Yeah, because here, people from every city, Karkhiv, Lviv, Odessa, everybody comes here. Maybe less from the East, but there are still people here from the East. It’s like a small country here on Maidan, here is everything and I think maybe we can try to be one friendly nation after this revolution.